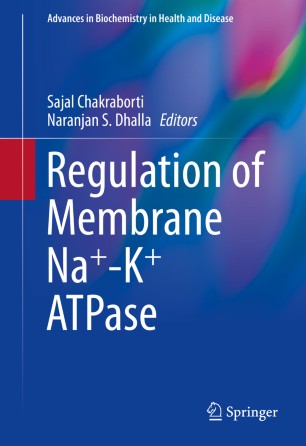 Part of the Advances in Biochemistry in Health and Disease book series (ABHD, volume 15)

Na+-K+ ATPase or Na-pump ATPase, a member of “P”-type ATPase superfamily, is characterized by association of multiple isoforms mainly of it’s α- and β- subunits. At present four different α- (α-1,α-2,α-3 and α-4) and three β- (β-1, β-2, and β-3) isoforms have been identified in mammalian cells and their differential expressions are tissue specific. Regulation of Na+-K+ ATPase activity is an important but a complex process, which involves short-term and long-term mechanisms. Short-term regulation of Na+-K+ ATPase is either mediated by changes in intracellular Na+ concentrations that directly affect the Na+-pump activity or by phosphorylation/dephosphorylation-mediated by some stimulants leading to changes in its expression and transport properties. On the other hand, long-term regulation of Na+-K+ ATPase is mediated by hormones, such as mineralocorticoids and thyroid hormones, which cause changes in the transcription of genes of α- and β- subunits leading to an increased expression in the level of Na+-pump. Several studies have revealed a relatively new type of regulation that involves the association of small, single span membrane proteins with this enzyme. These proteins belong to the FXYD family, the members of which share a common signature sequence encompassing the transmembrane domain adjacent to the isoform(s) of α-β subunits of Na+-K+ ATPase. Considering the extraordinary importance of Na+-K+ ATPase in cellular function, several internationally established investigators have contributed their articles in the monograph entitled “Regulation of Membrane Na+-K+ ATPase” for inspiring young scientists and graduate students to enrich their knowledge on the enzyme, and we are sure that this book will soon be considered as a comprehensive scientific literature in the area of Na+-K+ ATPase regulation in health and disease.