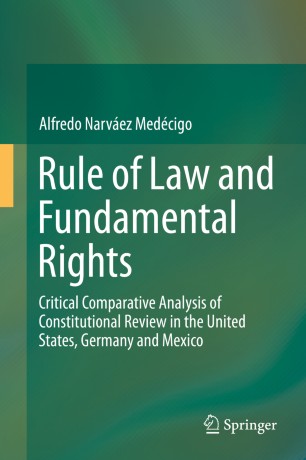 Rule of Law and Fundamental Rights

Critical Comparative Analysis of Constitutional Review in the United States, Germany and Mexico

This book, which originated from the broadly held view that there is a lack of Rule-of-law in Mexico, and from the emphasis of traditional academia on cultural elements as the main explanation, explores the question of whether there is any relationship between the system of constitutional review ― and thus the ‘law’ as such ― and the level of Rule-of-law in a given state. To do so, it elaborates a theoretical model for achieving Rule-of-law and compares it to the constitutional review systems of the United States, the Federal Republic of Germany, and Mexico. The study concludes that the two former states correspond to the model, while the latter does not. This is fundamentally due to the role each legal system assigns to ordinary jurisdiction in carrying out constitutional review. Whereas the US and Germany have fostered the policy that constitutional review regarding the enforcement of basic rights is the responsibility of ordinary courts, Mexico has relied too heavily on the specialized constitutional jurisdiction.