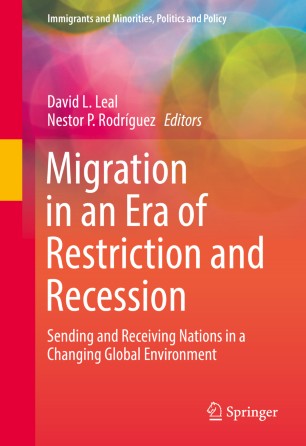 Migration in an Era of Restriction and Recession

Sending and Receiving Nations in a Changing Global Environment

Part of the Immigrants and Minorities, Politics and Policy book series (IMPP)

We live in an age of global migration. The number of immigrants worldwide is large and growing. At the same time, public and political reactions against immigrants have grown in the US, the UK, Canada, and other traditional and non-traditional receiving nations. In response to this trend, this book assembles an interdisciplinary group of scholars to better understand two dimensions of contemporary immigration policy – a growing enforcement and restriction regime in receiving nations, and the subsequent effects on sending nations.  It begins with three background chapters on immigration politics and policies in the United States, Europe, and Mexico. This is followed by eleven chapters about specific receiving and sending nations – four for the United States, three for Europe, and four for the sending nations of Mexico, Turkey, Peru, and Poland. This selection of cases and the multidisciplinary approach provides a unique perspective that supplements more standard case studies and disciplinary research. By discussing a greater range of nations and topics—the global consequences of increased deportations, stronger border security, greater travel restrictions, stagnant economies, and the loss of remittances—this volume fills a significant gap in the current body of literature. As such, this book is of interest to immigration policy scholars and students of all levels as well as individuals in think tanks, advocacy communities, the media, and governments.  ​