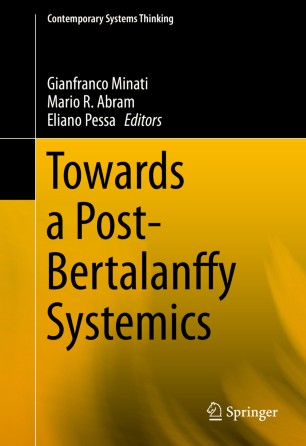 This book contains the proceedings of the Sixth National Conference of the Italian Systems Society. The title, Towards a post-Bertalanffy Systemics, aims to underline the need for Systemics and Systems Science to generalize theoretically concepts related to complexity (the great enemy of Bertalanffy Systemics). Hopefully this goal should be achieved by working in an inter-disciplinary and trans-disciplinary fashion, using systemic concepts arising from various disciplines and from the original, or Bertalanffy Systemics, as well. The interdisciplinary nature of the original Systemics and its power of generalization were given, overall, by the fact that the problems and solutions of one discipline become problems and solutions for another. Today, the modeling and interpretation of multidisciplinary approaches and representations makes easier to recognize these interconnections. The context, however, has changed dramatically. Of course, the challenge is still to find theoretical generalizations and applications, even where we have a lot of specificities, but we know very little on how to combine them. We cannot, however, simply replace the old with the new, but we must introduce strategies to recognize, represent, model and act on new levels, combining multiple representations, functions and emergence. In many disciplines this has been already done, and inevitably well, since targets and projects are well specified and oriented. The challenge is to do it for Systemics, with the vocations of cultural and theoretical generalization. Examples of new issues introduced by such theoretical disciplinary improvements, dealt with by many disciplines, include the study of mesoscopic or middle-way level, of multiple and dynamic coherence, of equivalence/non-equivalence, of fractality, of networks, of non-causality, of non-invasiveness, of non-prescribability, of non-separability, of quasi properties, of symmetry properties, of topological dynamics, as well as of quantum theories and concepts.
The conference was devoted to identifying, discussing and understanding possible interrelationships of theoretical disciplinary improvements, recognized as having prospective fundamental roles for a new post-Bertalanffy Systemics. The latter should be able to deal with problems related to complexity in a generalized way. In this context the inter-disciplinarity should consists, for instance, in a disciplinary reformulation of problems, as from algebraic to geometrical, from military to political, from biological to chemical, while the trans-disciplinarity should be related to the study of such reformulations and their properties.

Gianfranco Minati, Mathematician, Founder and president of the Italian Systems Society (AIRS); Doctoral lecturer at the Polytechnic of Milan; Member of the scientific committee of Conferences and Systems Societies. He is author of 32 chapters in books; editor of 7 books and journals; author or co-author of 15 books; author of 30 articles and of academic publications. His current research interest focuses on 1) Modelling processes of emergence by using Meta-Structures; 2) the emerging of a post-Bertalanffy Systemics; 3) the Dynamic Usage of Models (DYSAM), Logical Openness; 4) Architecture and Design as the design of social meta-structures to influence processes of emergence in social systems.

Mario R. Abram, Physicist, is an active member of the Italian Systems Society (AIRS). He worked mainly in ENEL (Italian Power Agency), at Research Department (Automatica Research Center), then in Cesi S.p.A. and Cesi Ricerca S.p.A. He experienced hybrid and digital simulation systems, working on models of power systems, thermoelectric and nuclear power plants and processes control. He participated in the building of real-time simulators for thermoelectric power plants and their application to control systems testing and tuning, in the development of supervision and control systems for power testing facilities and distribution networks. Also he worked on the application of neural networks to power systems supervision and investigated safety conditions in interactions between infrastructures. He authored several publications in systems science.  His research interests include: dynamical systems, modelling and simulation of processes and interactions between infrastructural networks.

Eliano Pessa, Theoretical Physicist, is actually Full Professor of General Psychology and Cognitive Modeling at the University of Pavia, Italy. He has already been Dean of the Department of Psychology and of the Inter-departmental Research Center on Cognitive Science in the same university. In the past he has been Associate Professor of Artificial Intelligence at the University of Rome “La Sapienza”, Faculty of Psychology. He is author or co-author of 10 books and of a large number of papers on scientific journals, books, proceedings of international conferences. His scientific research interests include: quantum theories of brain operation, computational neuroscience, artificial neural networks, models of emergence processes, quantum field theory, models of phase transitions in condensed matter, models of human memory and visual perception, models of decision making, models of statistical reasoning.