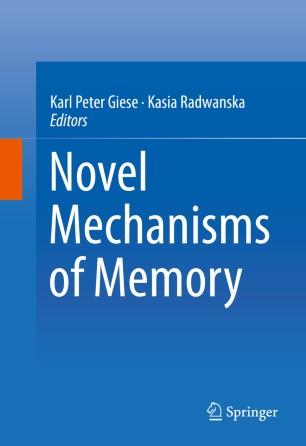 This book integrates discoveries from recent years to show the diversity of molecular mechanisms that contribute to memory consolidation, reconsolidation, extinction, and forgetting. It provides a special focus on the processes that govern functional and structural plasticity of dendritic spines. In nine chapters, new and important ideas related to learning and memory processes are presented. Themes discussed include the role of AMPA receptors in memory, two signalling cascades involved in local spine remodelling and memory, the role of extracellular matrix proteins in memory, the regulation of gene expression and protein translation, and mechanisms of retrieval-induced memory modulation and forgetting. The editors believe that the study of these topics represents a great step toward understanding the complexity of the brain and the processes it governs.

Prof. Karl Peter Giese studied biochemistry at the Ruhr-University in Bochum, Germany and did a PhD in neuroscience at the ETH Zurich in Switzerland. As a postdoctoral fellow at Cold Spring Harbor Laboratory, in the USA, he began to investigate molecular and cellular mechanisms of memory. From 1998 until 2006 he worked as Lecturer and Reader at University College London, UK, and since 2006 he is Professor of Neurobiology of Mental Health at King's College London, UK. He has published more than 80 papers and his H-index is currently 42.

Dr. Kasia Radwanska studied evolutionary ecology of freshwater snails at Warsaw University, Poland, and Bangor University, Wales. She did her PhD in neuroscience at Nencki Institute of Experimental Biology in Warsaw, where she begun studies on molecular basis of addiction. Next, she continued as a Marie Curie postdoctoral fellow at King’s College London in Prof. Karl Peter Giese’s group studying molecular and cellular mechanisms of memory. From 2013 she is a group leader at Nencki Institute of Experimental Biology working on molecular basis of alcohol addiction and memory. She hasn’t published as many papers as Prof. Giese but she does her best.