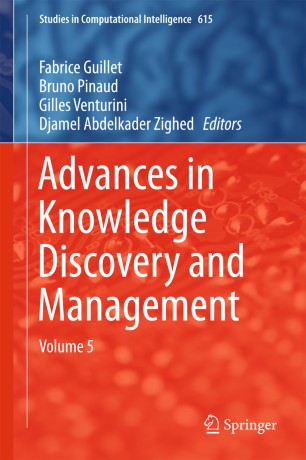 Advances in Knowledge Discovery and Management

This book is a collection of representative and novel works done in Data Mining, Knowledge Discovery, Clustering and Classification that were originally presented in French at the EGC'2013 (Toulouse, France, January 2013) and EGC'2014 Conferences (Rennes, France, January 2014). These conferences were respectively the 13th and 14th editions of this event, which takes place each year and which is now successful and well-known in the French-speaking community. This community was structured in 2003 by the foundation of the French-speaking EGC society (EGC in French stands for "Extraction et Gestion des Connaissances" and means "Knowledge Discovery and Management", or KDM).

This book is aiming at all researchers interested in these fields, including PhD or MSc students, and researchers from public or private laboratories. It concerns both theoretical and practical aspects of KDM. The book is structured in two parts called "Applications of KDM to real datasets" and "Foundations of KDM".