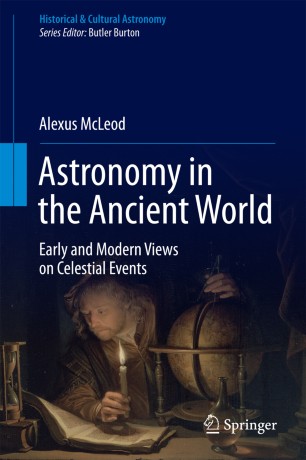 Astronomy in the Ancient World

Alexus McLeod explores every aspect of the lesser-known history of astronomy in the Americas (Mesoamerica and North America), China and India, each through the frame of a particular astronomical phenomena. Part One considers the development of astronomy in the Americas as a response, in part, to the Supernova of 1054, which may have led to a cultural renaissance in astronomy. He then goes on to explore the contemporary understanding of supernovae, contrasting it with that of the ancient Americas.  Part Two is framed through the appearances of great comets, which had major divinatory significance in early China. The author discusses the advancement of observational astronomy in China, its influence on politics and its role in the survival or failure of empires.  Furthermore, the contemporary understanding of comets is also discussed for comparison.  Part Three, on India, considers the magnificent observatories of the Rajput king Jai Singh II, and the question of their purpose. The origins of Indian astronomy are examined in Vedic thought and its development is followed through the period of Jai Singh, including the role played by solar eclipses. The author also includes a modern explanation of our understanding of eclipses to date. In the final section of the book, McLeod discusses how ancient traditions might help modern civilization better understand Earth’s place in the cosmos.