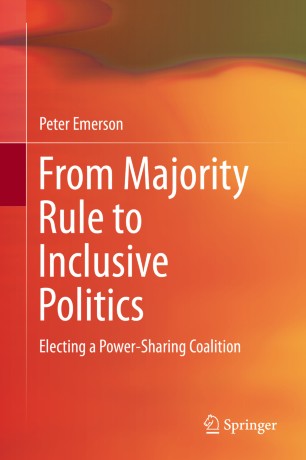 From Majority Rule to Inclusive Politics

This book discusses voting procedures in collective decision-making. Drawing on well-established election processes from all over the world, the author presents a voting procedure that allows for the speedy but fair election of a proportional, all-party coalition. The methodology - a matrix vote - is accurate, robust and ethno-color blind. In the vote, the counting procedure encourages all concerned to cross the gender as well as any party and/or sectarian divides. While in the resulting executive each party will be represented fairly and, at best, with the consensus of parliament, every minister will be the one most suited to his/her new portfolio. By using preferential voting and thus achieving consensus, the matrix vote will be fundamental to the resolution of conflicts.

The matrix vote can also be used when:

• one parliamentary party elects a government or shadow cabinet, or organizations in civil society elect their governing boards or executive committees