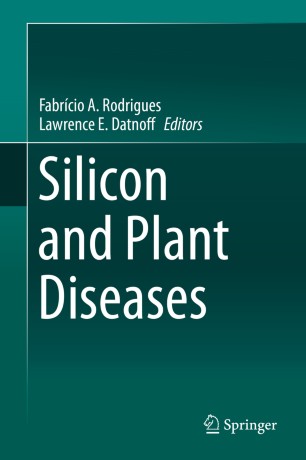 One of the most notable plant effects of silicon is the reduction in the intensities of a number of plant diseases caused by biotrophic, hemibiotrophic, and necrotrophic pathogens. This reduction in symptom expression is due to the element’s effect on a number of components of host plant resistance that includes the incubation period, latent period, lesion size, lesion number and inoculum production. Silicon also has been demonstrated to decrease certain diseases to the same level of intensity as a fungicide while augmenting susceptible cultivars to a level of resistance equivalent to complete genetic resistance. The mechanical barrier hypothesis, resulting from silicon polymerization below the cuticle and in the cell walls, was first proposed to explain how this element reduced plant disease development. However, new insights have revealed that plants supplied with silicon had the phenylpropanoid pathway greatly potentiated (increase in the concentrations of total soluble phenolics and lignin), the activities of defense enzymes such as chitinases and β-1,3-glucanases kept higher during the pathogen´s infection process as well as the transcription of many genes related to plant defense occurred in a much faster and stronger manner. Even an improvement was noted in the antioxidant metabolism that contributed to the reduction in the cytotoxic effect of the reactive oxygen species that cause lipid peroxidation in the cell membrane. At the physiological level, the values of the leaf gas exchange parameters are kept higher upon pathogen infection and positively affected photosynthesis.

A number of facts are now known about the role of silicon in reducing plant diseases that include as silicon concentration (insoluble or soluble) increases in plant tissue, plant disease suppression will be dramatically improved; the silicon supply to the plant must be continuous or disease suppressive effects are reduced or non-existent; and silicon, only when root applied, will change the response of plants to infection by the pathogen at both the physiological and molecular level. As researchers and growers become more aware of silicon and its potential, this often overlooked “quasi-essential” element will be recognized as a viable means of enhancing crop health and performance.