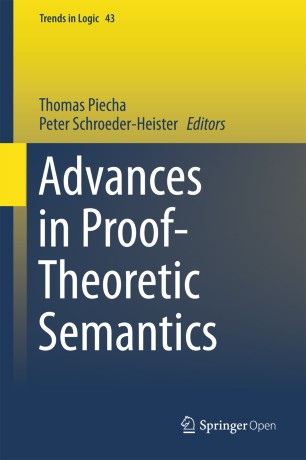 Part of the Trends in Logic book series (TREN, volume 43)

This volume is the first ever collection devoted to the field of proof-theoretic semantics. Contributions address topics including the systematics of introduction and elimination rules and proofs of normalization, the categorial characterization of deductions, the relation between Heyting's and Gentzen's approaches to meaning, knowability paradoxes, proof-theoretic foundations of set theory, Dummett's justification of logical laws, Kreisel's theory of constructions, paradoxical reasoning, and the defence of model theory.

The field of proof-theoretic semantics has existed for almost 50 years, but the term itself was proposed by Schroeder-Heister in the 1980s. Proof-theoretic semantics explains the meaning of linguistic expressions in general and of logical constants in particular in terms of the notion of proof. This volume emerges from presentations at the Second International Conference on Proof-Theoretic Semantics in Tübingen in 2013, where contributing authors were asked to provide a self-contained description and analysis of a significant research question in this area. The contributions are representative of the field and should be of interest to logicians, philosophers, and mathematicians alike.

Thomas Piecha graduated both in Philosophy and in Physics,and holds a Ph.D. in Computer Science. He has published on proof-theoretic and dialogical approaches in logic, and currently works on the proof-theoretic analysis of hypothetical reasoning.

Peter Schroeder-Heister is professor of logic and philosophy of language at the University of Tübingen, holding a joint appointment in the Departments of Philosophy and of Computer Science. He works in particular on philosophical aspects of proof theory and is a leading expert in the area of proof-theoretic semantics.