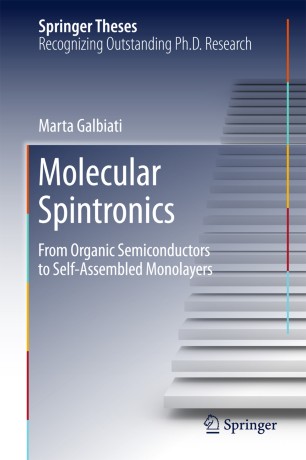 From Organic Semiconductors to Self-Assembled Monolayers

The manuscript is divided into three parts, the first of which introduces the basic concepts of spintronics and advantages that molecules can bring to this field. The state of the art on organic and molecular spintronics is also presented, with a special emphasis on the physics and experimental evidence for spinterfaces.

The book’s second and third parts are dedicated to the two main experimental topics investigated in the thesis: Self-Assembled Monolayers (SAMs) and Organic Semiconductors (OSCs). The study of SAMs-based magnetic tunnel nanojunctions reveals the potential to modulate the properties of such devices “at will,” since each part of the molecule can be tuned independently like a “LEGO” building block. The study of Alq3-based spin valves reveals magnetoresistance effects at room temperature and is aimed at understanding the respective roles played by the two interfaces. Through the development of these systems, we demonstrate their potential for spintronics and provide a solid foundation for spin polarization engineering at the molecular level.