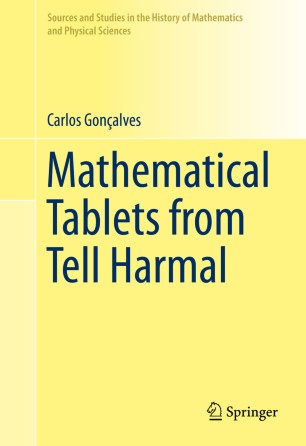 This work offers a re-edition of twelve mathematical tablets from the site of Tell Harmal, in the borders of present-day Baghdad. In ancient times, Tell Harmal was Šaduppûm, a city representative of the region of the Diyala river and of the kingdom of Ešnunna, to which it belonged for a time. These twelve tablets were originally published in separate articles in the beginning of the 1950s and mostly contain solved problem texts. Some of the problems deal with abstract matters such as triangles and rectangles with no reference to daily life, while others are stated in explicitly empirical contexts, such as the transportation of a load of bricks, the size of a vessel, the number of men needed to build a wall and the acquisition of oil and lard.

This new edition of the texts is the first to group them, and takes into account all the recent developments of the research in the history of Mesopotamian mathematics. Its introductory chapters are directed to readers interested in an overview of the mathematical contents of these tablets and the language issues involved in their interpretation, while a chapter of synthesis discusses the ways history of mathematics has typically dealt with the mathematical evidence and inquires how and to what degree mathematical tablets can be made part of a picture of the larger social context. Furthermore, the volume contributes to a geography of the Old Babylonian mathematical practices, by evidencing that scribes at Šaduppûm made use of cultural material that was locally available. The edited texts are accompanied by translations, philological, and mathematical commentaries.