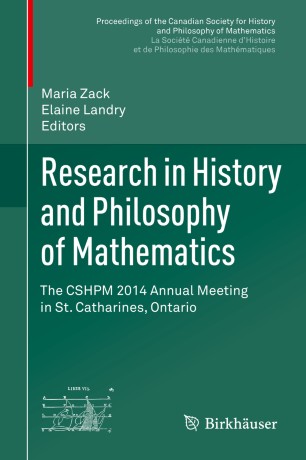 Research in History and Philosophy of Mathematics

This volume contains thirteen papers that were presented at the 2014 Annual Meeting of the Canadian Society for History and Philosophy of Mathematics/La Société Canadienne d’Histoire et de Philosophie des Mathématiques, held on the campus of Brock University in St. Catharines, Ontario, Canada. It contains rigorously reviewed modern scholarship on general topics in the history and philosophy of mathematics, as well as on the meeting’s special topic, Early Scientific Computation. These papers cover subjects such as

•Physical tools used by mathematicians in the seventeenth century

•The development of the Venn diagram

•A description of the 1924 International Mathematical Congress held in Toronto, told in the form of a “narrated slide show” Written by leading scholars in the field, these papers will be accessible to not only mathematicians and students of the history and philosophy of mathematics, but also anyone with a general interest in mathematics.