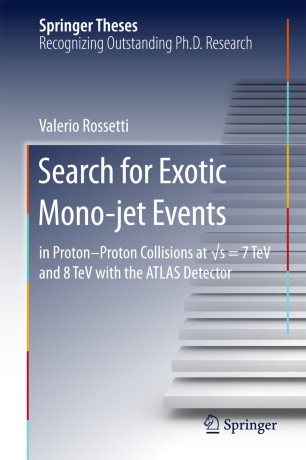 This thesis describes in detail the search for new phenomena in mono-jet final states with the ATLAS experiment at the LHC. The final state is considered the golden channel in the searches for large extra dimensions (LED) but also allows access to a very rich SUSY-related phenomenology pertaining to the production of weakly interacting massive particles (WIMPS), SUSY Dark Matter candidates, GMSB SUSY models with very light gravitino masses, as well as stop an sbottom pair production in compressed scenarios (with nearly degenerated squarks and the lightest neutralino), and also invisible Higgs searches, among others. Here, a number of these scenarios are explored. The measurements presented yield new powerful constraints on the existence of extra spatial dimensions, the pair production of WIMPs, and also provide the best limit to date on the gravitino mass.

The author started working on the ATLAS experiment in 2008 for his master studies on High Energy Physics, at Università di Roma "La Sapienza". The work of his master thesis has been essential for implementing novel trigger techniques for the detection of long lived particles in ATLAS. Later in 2008, he started doctoral studies at Universidad Autonoma de Barcelona, under the supervision of Prof. Mario Martinez Perez. He worked on the commissioning of the ATLAS Tile calorimeter, and on the search of exotic phenomena in the mono-jet final state. He made fundamental contributions to several ATLAS papers published in international journals. Since 2013, he has been working in the ATLAS group at Stockholm University. He has taken positions of responsibility in the Tile calorimeter community, and he continued working on searches for new physics in final states with missing transverse momentum and jets.