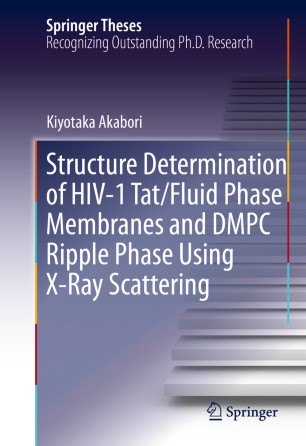 This Thesis in biological physics has two components, describing the use of X-ray scattering techniques to study the structure of two different stacked lipid membrane systems.

The first part focuses on the interaction between a short 11-mer peptide, Tat, which is part of the Tat protein in the HIV-1 virus.  Although highly positively charged, the Tat protein has been shown to translocate through hydrocarbon lipid bilayers easily, without requiring the cell’s energy, which is counter to its Born self-energy.  In this work Tat’s location in the headgroup region was demonstrated using a combined X-ray scattering and molecular dynamics approach.  Bilayer thinning was observed as well as softening of different membrane mimics due to Tat.  It was concluded that Tat’s headgroup location, which increases the area/lipid, and its bilayer softening likely reduce the energy barrier for passive translocation.

The second part is a rigorous investigation of an enigmatic phase in the phase diagram of the lipid dimyristoylphosphatidylcholine (DMPC).  The ripple phase has fascinated many researchers in condensed matter physics and physical chemistry as an example of periodically modulated phases, with many theoretical and simulation papers published.  Despite systematic studies over the past three decades, molecular details of the structure were still lacking.  By obtaining the highest resolution X-ray data so far, this work revealed the complex nature of the chain packing, as well as confirming that the major side is thicker than the minor side of the saw-tooth ripple structure.  The new model shows that the chains in the major arm are tilted with respect to the bilayer normal and that the chains in the minor arm are slightly more disordered than all-trans gel-phase chains, i.e., the chains in the minor arm are more fluid-like.  This work provides the highest resolution X-ray structure of the ripple phase to-date.