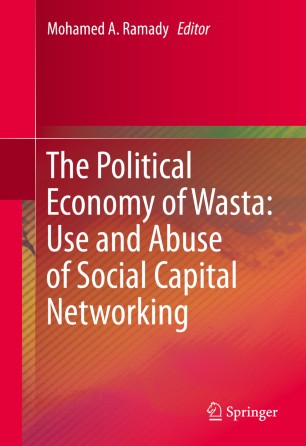 The Political Economy of Wasta: Use and Abuse of Social Capital Networking

The term ‘wasta’ stems from the Arabic root for ‘middle’ or ‘medium' and describes the phenomenon of using ‘connections’ to find job, government services or other favors to circumvent bureaucracy or bypass the system as a whole. The effects of ‘wasta’ may be both positive or negative, and is not a phenomenon that is particular to the Arab or Muslim world, but also to many other cultures and regions of the world, with similar concepts popularly known as ubuntu, guanxi, harambee, naoberschop, or “old boy network” used in African, Chinese and European societies.
By its very nature ‘wasta’ is an area of grey or even black information, and, like corruption to which it is most often associated, is hard to assess although country corruption perception indexes attempt to provide a quantifiable basis. In the final analysis such ratings are based on perceptions of corruption, and this perception may vary strongly depending on different societal structures and cultural modes, whether these are extended family systems, tribal, clans or more atomized societies where relationships are essentially transactional and rule based. In a western perspective where ‘wasta’ may be considered as a form of corruption, in other societies it may be perceived as something ‘natural’ and not criminal, and using one's 'wasta ' in tribal societies to help clan members is seen as a duty. The difference stems from the 'innocent ' use of 'wasta' to make introductions, as opposed to its abuse in placing unqualified persons in positions .The volume brings together academics and professional experts to examine a range of multi-faceted social, economic and political issues raised by the use and abuse of social networking, covering various topics like:
The volume also offers insights into social relations and ethics, and how the use of ‘wasta’ contradicts with common held religious principles, along with some country studies on Islamic principles and the use of ‘wasta’.
Mohamed Ramady is a Visiting Associate Professor, King Fahd University of Petroleum and Minerals, Saudi Arabia.