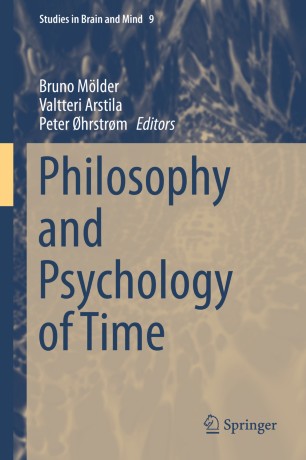 Philosophy and Psychology of Time

Part of the Studies in Brain and Mind book series (SIBM, volume 9)

This book is an edited collection of papers from international experts in philosophy and psychology concerned with time. The collection aims to bridge the gap between these disciplines by focussing on five key themes and providing philosophical and psychological perspectives on each theme.

The first theme is the concept of time. The discussion ranges from the folk concept of time to the notion of time in logic, philosophy and psychology. The second theme concerns the notion of present in the philosophy of mind, metaphysics, and psychology. The third theme relates to continuity and flow of time in mind. One of the key questions in this section is how the apparent temporal continuity of conscious experience relates to the possibly discrete character of underlying neural processes. The fourth theme is the timing of experiences, with a focus on the perception of simultaneity and illusions of temporal order. Such effects are treated as test cases for hypotheses about the relationship between the subjective temporal order of experience and the objective order of neural events. The fifth and the final theme of the volume is time and intersubjectivity. This section examines the role of time in interpersonal coordination and in the development of social skills.

The collection will appeal to both psychologists and philosophers, but also to researchers from other disciplines who seek an accessible overview of the research on time in psychology and philosophy.

Bruno Mölder is a Senior Research Fellow of Theoretical Philosophy at the University of Tartu. He works mainly in the philosophy of mind, focusing on time consciousness, social cognition and interpretivism. He has edited several philosophy books in Estonian and is an author of Mind Ascribed: An elaboration and defence of interpretivism (John Benjamins 2010). Valtteri Arstila is a Senior Research Fellow at the Department of Behavioral Sciences and Philosophy at the University of Turku. His research focus is on neurophilosophy, especially on the issues of color philosophy, consciousness and time consciousness. He is a co-editor of Subjective Time: Philosophy, Psychology and Neuroscience of Temporality (MIT Press 2014). Peter Øhrstrøm is Professor of Information Science at the Department of Communication and Psychology, Aalborg University, Denmark. His research focus is on the logic of time, and in particular the philosophy of A.N. Prior. He is the author of a number of papers within this field, and together with Per Hasle he has published the book Temporal logic – From Ancient Ideas to Artificial Intelligence, Kluwer 1995.