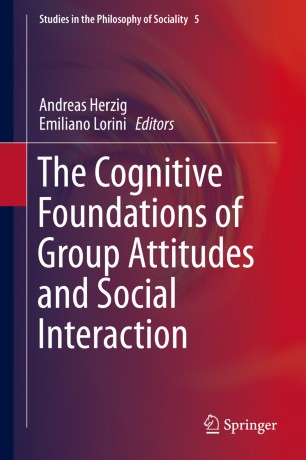 The Cognitive Foundations of Group Attitudes and Social Interaction

Part of the Studies in the Philosophy of Sociality book series (SIPS, volume 5)

This book offers a widely interdisciplinary approach to investigating important questions surrounding the cognitive foundations of group attitudes and social interaction. The volume tackles issues such as the relationship between individual and group attitudes, the cognitive bases of group identity and group identification, and the link between emotions and individual attitudes.

This volume delves into the links between individual attitudes (such as beliefs, goals and intentions) and how they are reflected in shared attitudes where common belief, collective acceptance, joint intentions, and group preferences come into play. It pursues answers to the connections between trust and beliefs, goals and intentions and attempts to investigate questions such as: does trust have an affective component and how it may relate to hope and fear? The volume also scrutinizes game theory and questions whether it can satisfactorily explain and model social interaction and if there may be any concepts which are not addressed by the current theory.

Contributors are derived from disciplines including philosophy, economics, psychology, logic, and computer science. Interdisciplinary in scope and comprehensive detail, this volume integrates a variety of approaches – philosophical, psychological and artificial intelligence – to strategic, normative and emotional aspects of social interaction.

Andreas Herzig (born 1960) is a research director at the Institut de Recherche en Informatique de Toulouse (IRIT) of the French National Research Council (CNRS). His main research topic is the investigation of logical models of interaction, with a focus on logics for reasoning about knowledge, belief, time, action, intention and obligation and the development of reasoning methods for them.