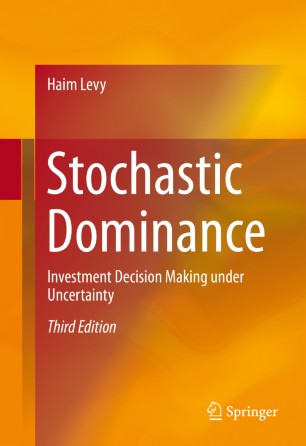 This updated 3rd edition is devoted to the analysis of various Stochastic Dominance (SD) decision rules. It discusses the pros and cons of each of the alternate SD rules, the application of these rules to various research areas like statistics, agriculture, medicine, measuring income inequality and the poverty level in various countries, and of course, to investment decision-making under uncertainty. The book features changes and additions to the chapters, and also includes two completely new chapters. One deals with asymptotic SD and the relation between FSD and the maximum geometric mean (MGM) rule (or the maximum growth portfolio). The other new chapter discusses bivariate SD rules where the individual’s utility is determined not only by his own wealth, but also by his standing relative to his peer group.

The book covers the following basic issues: the SD approach, asymptotic SD rules, the mean-variance (MV) approach, as well as the non-expected utility approach. The non-expected utility approach focuses on Regret Theory (RT) and mainly on prospect theory (PT) and its modified version, cumulative prospect theory (CPT) which assumes S-shape preferences. In addition to these issues the book suggests a new stochastic dominance rule called the Markowitz stochastic dominance (MSD) rule corresponding to all reverse-S-shape preferences. It also discusses the concept of the multivariate expected utility and analyzed in more detail the bivariate expected utility case.

“In this book, Prof. Levy presents his in-depth insights on a wide range of SD-related topics such as the MV approach, almost MV rule, CAPM statistics, the bivariate and multivariate expected utility, and diversification. He also formulates the SD rules in terms of distribution quantiles so that he can extend the SD theories to analyze riskless assets, discuss some open problems in SD, and illustrate the applications

of SD in different areas. As such, researchers who would like to understand the SD theories systematically will find this book a valuable reference while practitioners will learn a lot on how SD theories can be applied in real life problems.” -Wong Wing Keung, Hong Kong Baptist University

“This book is a standard reference for scholars and practitioners in finance and economics. Recent years have witnessed important progress in theory and methods for applying Haim Levy’s brain child to portfolio management and asset pricing. I am thrilled by the brilliant synthesis and perspectives offered in this book. Standing on Haim’s shoulders, the reader will discover a wealth of new academic and commercial applications. A must-read.” -Thierry Post, Koç University