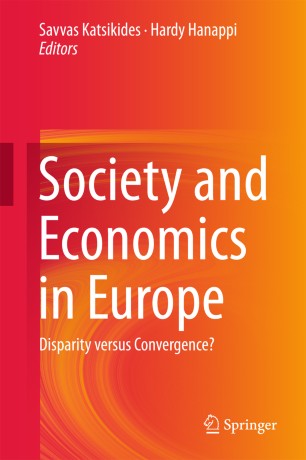 Society and Economics in Europe

This book takes stock of the lessons to be learned from the experiences of different countries on their way to a transition into a unified Europe. It demonstrates how the project of a unified Europe is a social pilot project that is unique in human history, both with respect to the sheer number of people involved and with respect to the cultural diversity it aims to turn into a progressive advantage. With no historical experience at hand, the transition into a unified Europe is an exploratory process, often risky but sometimes also surprisingly successful. To improve the chances of establishing a successful unification it is particularly important that we learn from the mistakes made so far; and that we learn rapidly, since the forces working against the pilot project of Europe will gain power very fast if the unification success slows down. And as the recent developments in Greece show, the vision of the final goal itself can well change during this exciting quest. Apart from providing the pieces of a mosaic on which a more general theory can be built, this book can be read as a collection of experiences – mistakes as well as triumphs – which should help the European learning process. The structure of the book mirrors Europe’s diversity: specific country studies are combined with more general chapters, and quantitatively oriented econometric work is combined with qualitatively oriented sociological studies.

Hardy Hanappi was born in Vienna (1951) and studied economics and Informatics at the University of Vienna and at the Technical University of Vienna. Before returning to university he has worked as econometrician for OPEC and as CEO for the consulting firm ECON GmbH. He then became university teacher and researcher at the TU-Vienna and concentrated on macroeconomics, political economy, simulation methods and game theory. From 1992 till 1997 he was deputy director of socioeconomics at the Austrian Academy of Sciences. After his return to the TU Vienna he became head of economics, from 2001 till 2005 he also was director of the Institute for Monetary Economics (Ludwig Boltzmann-Institute). He currently is ad personam chair for political economy of European integration, a position granted by the European Commission. He is professorial research associate at SOAS (University of London) where he spent a sabbatical in 2011. Hardy Hanappi now works and lives in Vienna.