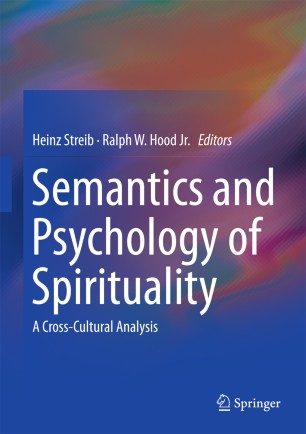 Semantics and Psychology of Spirituality

This book examines what people mean when they say they are “spiritual”. It looks at the semantics of “spirituality”, the visibility of reasons for “spiritual” preference in biographies, in psychological dispositions, in cultural differences between Germany and the US, and in gender differences. It also examines the kind of biographical consequences that are associated with “spirituality”. The book reports the results of an online-questionnaire filled out by 773 respondents in Germany and 1113 in the US, personal interviews with a selected group of more than 100 persons, and an experiment. Based on the data collected, it reports results that are relevant for a number of scientific and practical disciplines. It makes a contribution to the semantics of everyday religious language and to the cross-cultural study of religion, and to many related fields as well, because “spirituality” is evaluated in relation to personality, mysticism, well-being, religious styles, generativity, attachment, biography and atheism. The book draws attention to the – new and ever changing – ways in which people give names to their ultimate concern and symbolize their experiences of transcendence. ​