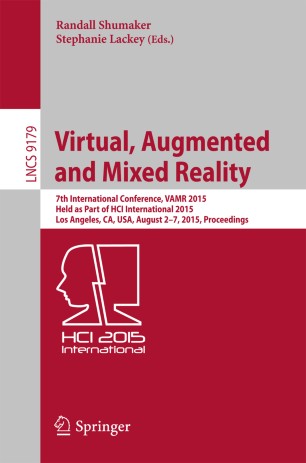 This volume constitutes the refereed proceedings of the 7th International Conference on Virtual, Augmented and Mixed Reality, VAMR 2015, held as part of the 17th International Conference on Human-Computer Interaction, HCI 2015, held in Los Angeles, CA, USA, in August 2015. The total of 1462 papers and 246 posters presented at the HCII 2015 conferences was carefully reviewed and selected from 4843 submissions. These papers address the latest research and development efforts and highlight the human aspects of design and use of computing systems. The papers thoroughly cover the entire field of human-computer interaction, addressing major advances in knowledge and effective use of computers in a variety of application areas. The 54 papers included in this volume are organized in the following topical sections: user experience in virtual and augmented environments; developing virtual and augmented environments; agents and robots in virtual environments; VR for learning and training; VR in Health and Culture; industrial and military applications.