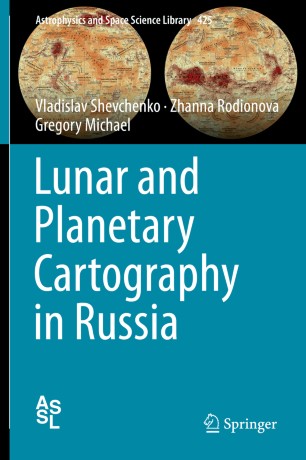 Lunar and Planetary Cartography in Russia

This book is the first to document in depth the history of lunar and planetary cartography in Russia. The first map of the far side of the Moon was made with the participation of Lomonosov Moscow University (Sternberg Astronomical Institute, MSU) in 1960. The developed mapping technologies were then used in preparing the “Complete Map of the Moon” in 1967 as well as other maps and globes. Over the years, various maps of Mars have emerged from the special course “Mapping of extraterrestrial objects” in the MSU Geography Department, including the hypsometric map of Mars at a scale of 1:26,000,000, compiled by J.A. Ilyukhina and published in 2004 in an edition of 5,000 copies. A more detailed version of this map has since been produced with a new hypsometric scale. In addition, maps of the northern and southern hemispheres of Mars have been compiled for the hypsometric globe of Mars.  Relief maps of Venus were made in 2008, 2010, and 2011, and hypsometric maps of Phobos and Deimos at a scale of 1:60,000 were published in 2011. History of Lunar and Planetary Cartography in Russia provides detailed information on the compilation of this diverse range of maps and will be of interest to all lunar and planetary cartographers.