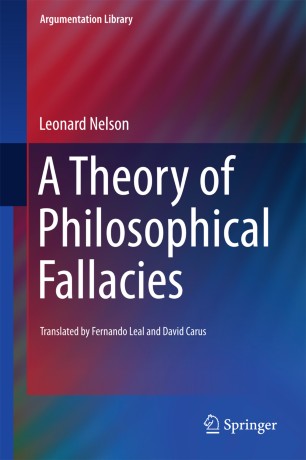 A Theory of Philosophical Fallacies

Presented as a Vorlesung in the German philosophical tradition, this book presents the most detailed account of Nelson’s method of argument analysis, celebrated by many luminaries such as Karl Popper. It was written in 1921 in opposition to the relativistic, subjectivistic and nihilistic tendencies of Nelson’s time. The book contains an exposition of a method that is a further development of Kant’s transcendental dialectics, followed by an application to the critical analysis of arguments by many famous thinkers, including Bentham, Mill, Poincaré, Leibniz, Hegel, Einstein, Bergson, Rickert, Simmel, Brentano, Stammler, Jellinek, Dingler, and Meinong. The book presents a general theory of philosophical argumentation as seen from the viewpoint of the typical fallacies committed by anybody arguing philosophically, whether professional philosophers or philosophical laypeople. Although the nature of philosophy and philosophical argumentation is one of the most recurrent objects of reflection for philosophers, this book represents the first attempt at a general theory of philosophical fallacy. According to Nelson, it is in the shape of false dilemmas that errors in reasoning always emerge, and false dilemmas are always the result of the same mechanism--the unwitting replacement of one concept for another.