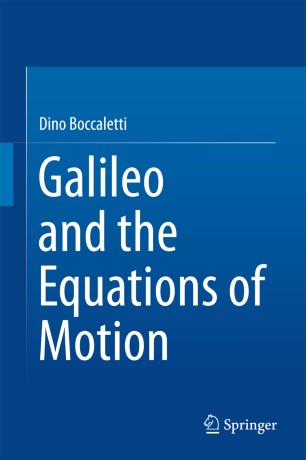 Galileo and the Equations of Motion

This book is intended as a historical and critical study on the origin of the equations of motion as established in Newton's Principia. The central question that it aims to answer is whether it is indeed correct to ascribe to Galileo the inertia principle and the law of falling bodies. In order to accomplish this task, the study begins by considering theories on the motion of bodies from classical antiquity, and especially those of Aristotle. The theories developed during the Middle Ages and the Renaissance are then reviewed, with careful analysis of the contributions of, for example, the Merton and Parisian Schools and Galileo’s immediate predecessors, Tartaglia and Benedetti. Finally, Galileo’s work is examined in detail, starting from the early writings.  Excerpts from individual works are presented, to allow the texts to speak for themselves, and then commented upon. The book provides historical evidence both for Galileo's dependence on his forerunners and for the major breakthroughs that he achieved. It will satisfy the curiosity of all who wish to know when and why certain laws have been credited to Galileo.