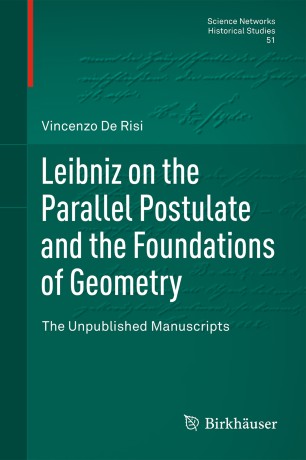 Leibniz on the Parallel Postulate and the Foundations of Geometry

This book offers a general introduction to the geometrical studies of Gottfried Wilhelm Leibniz (1646-1716) and his mathematical epistemology. In particular, it focuses on his theory of parallel lines and his attempts to prove the famous Parallel Postulate. Furthermore it explains the role that Leibniz’s work played in the development of non-Euclidean geometry. The first part is an overview of his epistemology of geometry and a few of his geometrical findings, which puts them in the context of the seventeenth-century studies on the foundations of geometry. It also provides a detailed mathematical and philosophical commentary on his writings on the theory of parallels, and discusses how they were received in the eighteenth century as well as their relevance for the non-Euclidean revolution in mathematics. The second part offers a collection of Leibniz’s essays on the theory of parallels and an English translation of them. While a few of these papers have already been published (in Latin) in the standard Leibniz editions, most of them are transcribed from Leibniz’s manuscripts written in Hannover, and published here for the first time. The book provides new material on the history of non-Euclidean geometry, stressing the previously neglected role of Leibniz in these developments.

This volume will be of interest to historians in mathematics, philosophy or logic, as well as mathematicians interested in non-Euclidean geometry.