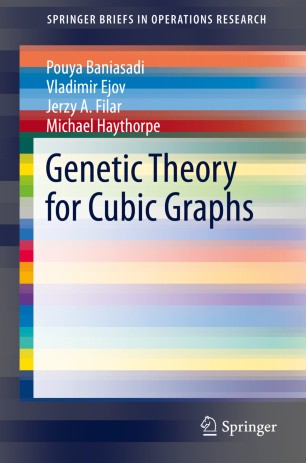 Part of the SpringerBriefs in Operations Research book series (BRIEFSOPERAT)

This book was motivated by the notion that some of the underlying difficulty in challenging instances of graph-based problems (e.g., the Traveling Salesman Problem) may be “inherited” from simpler graphs which – in an appropriate sense – could be seen as “ancestors” of the given graph instance. The authors propose a partitioning of the set of unlabeled, connected cubic graphs into two disjoint subsets named genes and descendants, where the cardinality of the descendants dominates that of the genes. The key distinction between the two subsets is the presence of special edge cut sets, called cubic crackers, in the descendants.

The result that any descendant can be constructed from a unique set of ancestor genes indicates that most of the structure in the descendant has been, in some way, inherited from that, very special, complete family of ancestor genes, with the remaining structure induced by the breeding operations. After establishing this, the authors proceed to investigate a number of graph theoretic properties: Hamiltonicity, bipartiteness, and planarity, and prove results linking properties of the descendant to those of the ancestor genes. They develop necessary (and in some cases, sufficient) conditions for a descendant to contain a property in terms of the properties of its ancestor genes. These results motivate the development of parallelizable heuristics that first decompose a graph into ancestor genes, and then consider the genes individually. In particular, they provide such a heuristic for the Hamiltonian cycle problem. Additionally, a framework for constructing graphs with desired properties is developed, which shows how many (known) graphs that constitute counterexamples of conjectures could be easily found.

Jerzy A Filar is Director of Flinders Mathematical Sciences Laboratory, Flinders University, Australia, and is a Fellow of the Australian Mathematical Society. His research interests span both theoretical and applied topics in the fields of operations research, optimization, game theory, applied probability, and environmental modelling.

Michael Haythorpe is mathematician at Flinders University, Australia. His areas of research interest are numerical optimisation, computational mathematics, algorithm development and graph theory. He is a recipient of the AustMS Lift-off Fellowship Award 2010.

“This is a concise treatment of the theory. Its self-contained nature and its thoughtful organization will make it a useful reference for researchers in the field.” (Hong-Jian Lai, zbMATH 1330.05003, 2016)