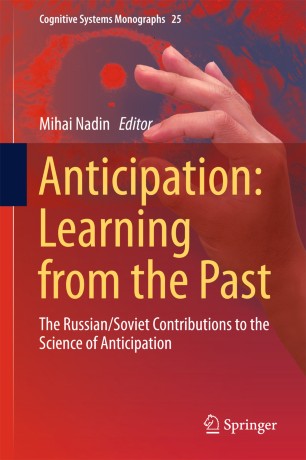 Anticipation: Learning from the Past

The Russian/Soviet Contributions to the Science of Anticipation

This volume presents the work of leading scientists from Russia, Georgia, Estonia, Lithuania, Israel, and the USA, revealing major insights long unknown to the scientific community. Without any doubt their work will provide a springboard for further research in anticipation. Until recently, Robert Rosen (Anticipatory Systems) and Mihai Nadin (MIND – Anticipation and Chaos) were deemed forerunners in this still new knowledge domain.

The distinguished neurobiologist, Steven Rose, pointed to the fact that Soviet neuropsychological theories have not on the whole been well received by Western science. These earlier insights as presented in this volume make an important contribution to the foundation of the science of anticipation. It is shown that the daring hypotheses and rich experimental evidence produced by Bernstein, Beritashvili, Ukhtomsky, Anokhin, and Uznadze, among others—extend foundational work to aspects of neuroscience, physiology, motorics, education.