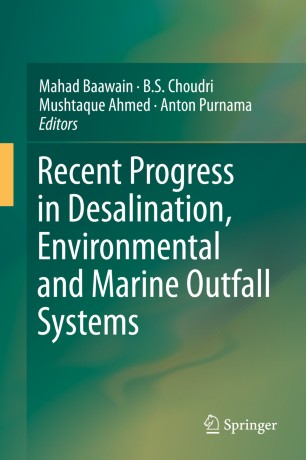 This book collects current scientific information on advanced technologies and management practices associated with the desalination industry in the Middle East and elsewhere around the world. The book opens with introductory chapter which briefly recounts the history of desalination, and describes the current state of development in the field.

Part I: Desalination Systems includes ten chapters which describe a variety of techniques and designs intended not only to minimize the impact of desalination, but also to save energy and use natural resources to maximize the output of integrated desalination systems. Among the highlights are a  chapter on the use of ceramic membrane technology for sustainable oil water production; a case study on the use of solar heating systems in desalination technology in Oman; discussion of fouling and its effect on design and performance of desalination systems; a review of shore approaches and sea-lines with case studies from Australia and Germany; and a discussion of the integration of desalination technology with renewable energy for climate change abatement in the Middle East and North Africa region.

Part II: Environmental Systems includes among others a chapter on regulating the use of water resources and desalination technology on a regional scale reducing the carbon footprint of desalination, with examples from Australia; a description of desalination for irrigation in the Souss Massa region in the south of Morocco; a study of the impact of the coastal intake environment on operating conditions of thermal desalination plants in the United Arab Emirates; a discussion of hydrodynamic and thermal dispersion modeling of the effluent in a coastal channel, with a case study from Oman; and a mathematical model study of effluent disposal from a desalination plant in the marine environment at Tuticorin in India.