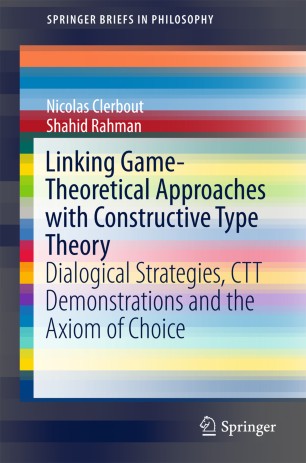 Dialogical Strategies, CTT demonstrations and the Axiom of Choice

This title links two of the most dominant research streams in philosophy of logic, namely game theory and proof theory. As the work’s subtitle expresses, the authors will build this link by means of the dialogical approach to logic. One important aspect of the present study is that the authors restrict themselves to the logically valid fragment of Constructive Type Theory (CTT). The reason is that, once that fragment is achieved the result can be extended to cover the whole CTT system. The first chapters in the brief offer overviews on the two frameworks discussed in the book with an emphasis on the dialogical framework. The third chapter demonstrates the left-to-right direction of the equivalence result. This is followed by a chapter that demonstrates the use of the algorithm in showing how to transform a specific winning strategy into a CCT-demonstration of the axiom of choice. The fifth chapter develops the algorithm from CTT-demonstrations to dialogical strategies. This brief concludes by introducing elements of discussion which are to be developed in subsequent work.