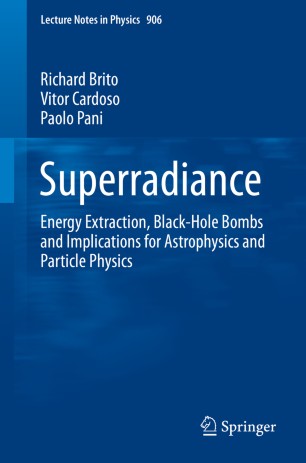 This volume gives a unified picture of the multifaceted subject of superradiance, with a focus on recent developments in the field, ranging from fundamental physics to astrophysics.

Superradiance is a radiation enhancement process that involves dissipative systems. With a 60 year-old history, superradiance has played a prominent role in optics, quantum mechanics and especially in relativity and astrophysics. In Einstein's General Relativity, black-hole superradiance is permitted by dissipation at the event horizon, which allows energy extraction from the vacuum, even at the classical level. When confined, this amplified radiation can give rise to strong instabilities known as "blackhole bombs'', which have applications in searches for dark matter, in physics beyond the Standard Model and in analog models of gravity. This book discusses and draws together all these fascinating aspects of superradiance.

Vitor Cardoso is an Assistant Professor (``Com Agregação'') of Physics at Instituto Superior Técnico, Portugal and a Visiting Fellow at the Perimeter Institute, Canada. He is an ERC grantee of the European Research Council and an outstanding Referee for the American Physical Society. His research interests include black hole physics, gravitational-wave physics and General Relativity.

Paolo Pani is a Marie Curie Fellow at Sapienza University of Rome and a FCT Researcher at CENTRA-IST in Lisbon. He is an outstanding Referee for the American Physical Society and a former research fellow at the Harvard-Smithsonian Center for Astrophysics. His research interests include black holes, foundations of General Relativity and relativistic astrophysics. In 2011, his PhD thesis on blackhole perturbation theory was awarded the Fubini Prize of the Italian Institute for Nuclear Physics.

Richard Brito is completing a doctorate in the gravity group at CENTRA-IST in Lisbon. His research interests include black holes, General Relativity and alternative theories of gravity. His PhD thesis focusses on studying dark matter candidates and alternative theories of gravity using compact objects. In 2013 he was awarded the "Prémio Estímulo à Investigação" by the Fundação Calouste Gulbenkian, a prize rewarding young researchers with strong research proposals.