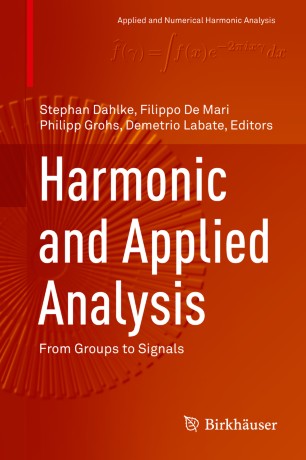 From Groups to Signals

This contributed volume explores the connection between the theoretical aspects of harmonic analysis and the construction of advanced multiscale representations that have emerged in signal and image processing. It highlights some of the most promising mathematical developments in harmonic analysis in the last decade brought about by the interplay among different areas of abstract and applied mathematics. This intertwining of ideas is considered starting from the theory of unitary group representations and leading to the construction of very efficient schemes for the analysis of multidimensional data.

After an introductory chapter surveying the scientific significance of classical and more advanced multiscale methods, chapters cover such topics as

A unified notation is used across all of the chapters to ensure consistency of the mathematical material presented.

Harmonic and Applied Analysis: From Groups to Signals is aimed at graduate students and researchers in the areas of harmonic analysis and applied mathematics, as well as at other applied scientists interested in representations of multidimensional data. It can also be used as a textbook for