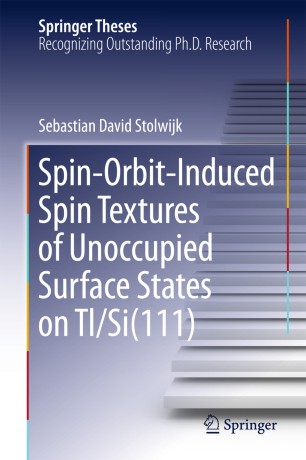 This thesis describes the construction of a rotatable spin-polarized electron source and its use in spin- and angle-resolved inverse photoemission to investigate the unoccupied electron states of Tl/Si(111)-(1x1) with special emphasis on their spin texture. Towards more efficient electronics - with the electron spin as information carrier: This motto is the motivation for numerous studies in solid state physics that deal with electron states whose spin degeneracy is lifted by spin-orbit interaction. This thesis addresses the spin-orbit-induced spin textures in momentum space in the surface electronic structure of a prototypical Rashba-type hybrid system: heavy metal thallium on semiconducting silicon. For Tl/Si(111)-(1x1), the thallium adlayer provides surface states with strong spin-orbit interaction and peculiar spin-orbit-induced spin textures: spin rotations and spin chirality in momentum space for unoccupied surface states with giant spin splittings. Almost completely out-of-plane spin-polarized valleys in the vicinity of the Fermi level are identified. As the valley polarization is oppositely oriented at specific points in momentum space, backscattering should be strongly suppressed in this system.