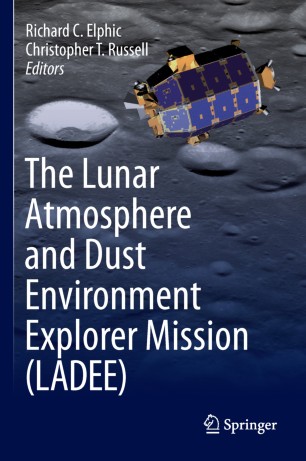 This volume contains five articles describing the mission and its instruments.  The first paper, by the project scientist Richard C. Elphic and his colleagues, describes the mission objectives, the launch vehicle, spacecraft and the mission itself.  This is followed by a description of LADEE’s Neutral Mass Spectrometer by Paul Mahaffy and company.  This paper describes the investigation that directly targets the lunar exosphere, which can also be explored optically in the ultraviolet.  In the following article Anthony Colaprete describes LADEE’s Ultraviolet and Visible Spectrometer that operated from 230 nm to 810 nm scanning the atmosphere just above the surface.  Not only is there atmosphere but there is also dust that putatively can be levitated above the surface, possibly by electric fields on the Moon’s surface.  Mihaly Horanyi leads this investigation, called the Lunar Dust Experiment, aimed at understanding the purported observations of levitated dust.  This experiment was also very successful, but in this case their discovery was not the electrostatic levitation of dust, but that the dust was raised by meteoroid impacts.  This is not what had been expected but clearly is the explanation that best fits the data.
Originally published in Space Science Reviews, Volume 185, Issue 1-4, 2014.