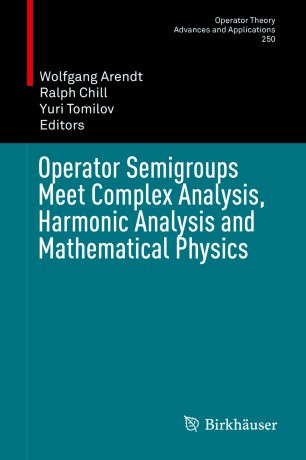 This proceedings volume originates from a conference held in Herrnhut in June 2013. It provides unique insights into the power of abstract methods and techniques in dealing successfully with numerous applications stemming from classical analysis and mathematical physics. The book features diverse topics in the area of operator semigroups, including partial differential equations, martingale and Hilbert transforms, Banach and von Neumann algebras, Schrödinger operators, maximal regularity and Fourier multipliers, interpolation, operator-theoretical problems (concerning generation, perturbation and dilation, for example), and various qualitative and quantitative Tauberian theorems with a focus on transfinite induction and magics of Cantor.

The last fifteen years have seen the dawn of a new era for semigroup theory with the emphasis on applications of abstract results, often unexpected and far removed from traditional ones. The aim of the conference was to bring together prominent experts in the field of modern semigroup theory, harmonic analysis, complex analysis and mathematical physics, and to present the lively interactions between all of those areas and beyond. In addition, the meeting honored the sixtieth anniversary of Prof C. J. K. Batty, whose scientific achievements are an impressive illustration of the conference goal. These proceedings present contributions by prominent scientists at this international conference, which became a landmark event.

They will be a valuable and inspiring source of information for graduate students and established researchers.