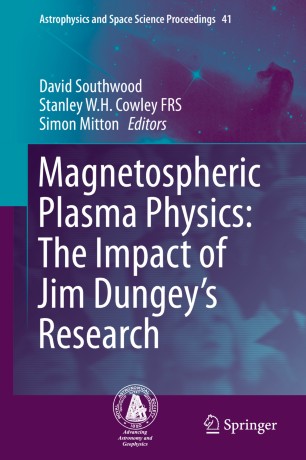 This book makes good background reading for much of modern magnetospheric physics. Its origin was a Festspiel for Professor Jim Dungey, former professor in the Physics Department at Imperial College on the occasion of his 90th birthday, 30 January 2013. Remarkably, although he retired 30 years ago, his pioneering and, often, maverick work in the 50’s through to the 70’s on solar terrestrial physics is probably more widely appreciated today than when he retired.

Dungey was a theoretical plasma physicist. The book covers how his reconnection model of the magnetosphere evolved to become the standard model of solar-terrestrial coupling. Dungey’s open magnetosphere model now underpins a holistic picture explaining not only the magnetic and plasma structure of the magnetosphere, but also its dynamics which can be monitored in real time. The book also shows how modern day simulation of solar terrestrial coupling can reproduce the real time evolution of the solar terrestrial system in ways undreamt of in 1961 when Dungey’s epoch-making paper was published.

Further contributions on current Earth magnetosphere research and space plasma physics included in this book show how Dungey’s basic ideas have remained explanative 50 years on. But the Festspiel also introduced some advances that possibly Dungey had not foreseen. One of the contributions presented in this book is on the variety of magnetospheres of the solar system which have been seen directly during the space age, discussing the variations in spatial scale and reconnection time scale and comparing them in respect of Earth, Mercury, the giant planets as well as Ganymede.