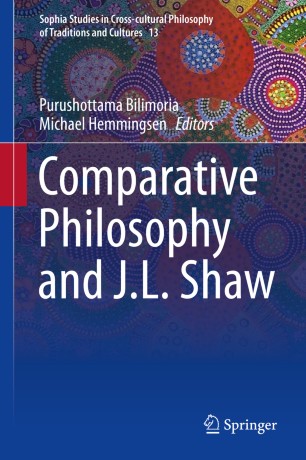 Part of the Sophia Studies in Cross-cultural Philosophy of Traditions and Cultures book series (SCPT, volume 13)

As a Festschrift, this book celebrates and honours the scholarly achievements of Professor Jaysankar Lal Shaw, one of the most eminent and internationally acclaimed comparative philosophers of our times. Original works by leading international philosophers and logicians are presented here, exploring themes such as: meaning, negation, perception, and Indian and Buddhist systems of philosophy, especially Nyaya perspectives.

Professor Shaw’s untiring effort to solve some of the problems of contemporary philosophy of language, logic, epistemology, metaphysics and morals from the perspectives of classical Indian philosophers or systems of philosophy is deserving of a tribute. Chapters in this volume reflect the diverse aspects of Shaw’s contribution to comparative philosophy and are organised into four sections: Language, Epistemology, Mathematics and Logic, Ethics and Politics.

These chapters would appeal to anyone interested in philosophy or East-West thinking, including students and professionals. Graduates and researchers with interests in epistemology, metaphysics, political philosophy, logic and non-western philosophy will find this work highly relevant.

Regarding the editors, Purushottama Bilimoria is a honorary professor at Deakin University and research fellow at the University of Melbourne in Australia, a Visiting Professor and Lecturer at University of California, Berkeley and Graduate Theological Union; Michael Hemmingsen is a PhD Candidate in the Department of Philosophy at McMaster University, Ontario, Canada.

Regarding the editors, Purushottama Bilimoria is a honorary professor at Deakin University and research fellow at the University of Melbourne in Australia, a Visiting Professor and Lecturer at University of California, Berkeley and Graduate Theological Union. His areas of specialist research and publications cover classical Indian philosophy and comparative ethics; Continental thought; cross-cultural philosophy of religion, diaspora studies; bioethics, and personal law in India. He is an Editor-in-Chief of Sophia, Journal of Philosophy of Religion, Springer. He also edits a book series with Springer on Sophia: cross-cultural studies in Culture and Traditions, Recent publication is Indian Ethics I, Ashgate 2007; OUP 2008, and Sabdapramana: Word and Knowledge (Testimony) in Indian Philosophy (revised reprint), Delhi: DK Print World 2008; ‘Nietzsche as ‘Europe’s Buddha’ and Asia’s Superman, Sophia, vol 47/3 2008; Postcolonial Philosophy of Religion (with Andrew Irvine, Ken Surin et al) Springer 2009. Teaches and publishes on Hindu religious philosophies. Also works on political philosophy, pertaining to ethics of rights, theories of justice, capabilities, education and gender issues in third world, particularly South Asian, contexts.

Michael Hemmingsen, McMaster University, Canada, is the editor of Human Beings and Freedom: An Interdisciplinary Perspective and Meaning and Identity: An Interdisciplinary Perspective, and author of “Unconventional Interpretations: Deleuze and the Vedānta on Spinoza,” and “Post-Modern Cosmopolitanism and Discourse Ethics.” He studied International Relations and Philosophy at Victoria University of Wellington, New Zealand. His interests include political philosophy – particularly around public discourse and equality – human rights and metaethics. His current research is looking at how to model public discourse in a way that allows full expression to currently excluded epistemologies and in particular indigenous forms of knowledge.