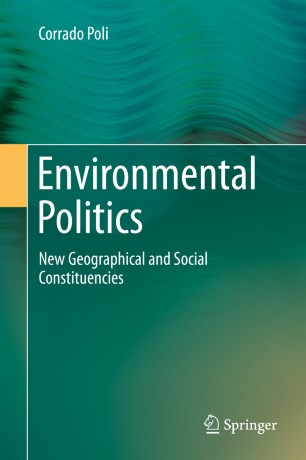 A change in the way humans relate to nature could be the starting point for a new environmental politics, a change which in itself will also influence relations among humans. Such a new approach would help to radically transform systems of production, not because they are unjust in traditional social terms, but because they endanger nature and humanity. This book opens an intellectual, academic and political discussion of environmental politics, which has the potential to involve large segments of the public and their public servants.

Thus far, the author points out, grassroots organizations have failed to win broad consensus and political power in the representative institutions. When the time comes to transform the single environmental issue into an electoral platform, environmentalists lose unity and effectiveness since they lack a common political vision and a cohesive strategy. On the other hand European politics is rapidly transforming because the challenge brought by so-called populist movements.

The author offers a completely new view of environmental politics, which challenges old theories. He proposes to start political analysis from an unconventional point of view: the relationship between humanity and nature, rather than the social justice and freedom perspective that has framed discourse over the last two centuries.

Up to date with current political cases such as populism and recent European elections, this book elaborates on the theory of political change and proposes new political strategies. The author expresses the need to forge the shared emotions and attitudes of activists into political ideologies and platforms, and the necessity for a new educational process and a new science politics to reform environmental politics.  In addition to offering politicians and activists new and practical guidelines for developing action strategies, this book provides a foundation for a university master program based on its issues.