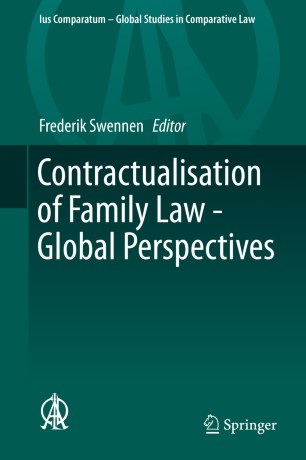 This volume presents global and comparative perspectives on the perpetual pendular movement of family law between status and contract. It contributes to the topical academic debate on ‘family law exceptionalism’ by exploring the blurred lines between public law, private law and family law, and sheds light on the many shades of grey that exist. The contributions focus on both substantive and procedural family law on parents and children and on life partners, with particular attention for contractual arrangements of family formations and of conflict resolution. The hypothesis underlying all contributions was the trend towards contractualisation of family law. A convergent research outcome resulting from the comparison of national reports was the ambivalent position of family law in legal systems worldwide. That comparison shows that, whereas family law is clearly moving towards contract with regard to old family formations, the contrary is true for new family formations. The movement towards contract is rarely considered to be contractualisation pur sang, with civil effect. The movement towards status, finally, does not necessarily witness ‘family law exceptionalism’ vis-à-vis private law, in view of the increasing State interventionism in private law relations in general. In sum, as the volume shows, the high permeability of the demarcations between the State, the family and the market impedes a categorial approach.

This volume is based on the general and selected national reports on the topic “Contractualisation of Family Law” that were presented at the XIXth International Congress of Comparative Law in Vienna in July 2014.