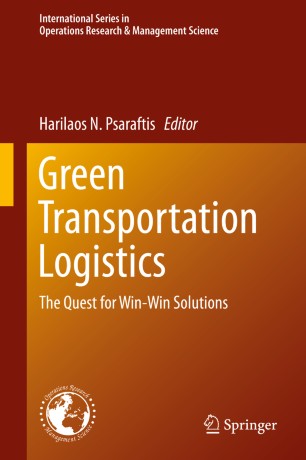 The Quest for Win-Win Solutions

This book examines the state of the art in green transportation logistics from the perspective of balancing environmental performance in the transportation supply chain while also satisfying traditional economic performance criteria.  Part of the book is drawn from the recently completed European Union project SuperGreen, a three-year project intended to promote the development of European freight corridors in an environmentally friendly manner.  Additional chapters cover both the methodological base and the application context of green transportation logistics.

Throughout, the book pursues the goal of “win-win” solutions and analyzes the phenomenon of “push-down, pop-up”, wherein a change in one aspect of a problem can cause another troubling aspect to arise.  For example, speed reduction in maritime transportation can reduce emissions and fuel costs, but could require additional ships and could raise in-transit inventory costs.  Or, regulations to reduce sulphur emissions may ultimately increase CO2 elsewhere in the supply chain. The book takes stock at the various tradeoffs that are at stake in the goal of greening the supply chain and looks at where balances can be struck.

Since May 2013 Harilaos N. Psaraftis is Professor of Transport Optimization at the Department of Transport of the Technical University of Denmark (DTU). He has a diploma from the National Technical University of Athens (NTUA, 1974), and two M.Sc. degrees (1977) and a Ph.D. (1979) from the Massachusetts Institute of Technology (MIT). He was a faculty member at MIT from 1979 to 1989 (Department of Ocean Engineering), receiving tenure there in 1985. In the period from 1989 to 2013 he was Professor of  Maritime Transport at the School of Naval Architecture and Marine Engineering and Director of the Laboratory for Maritime Transport at NTUA.

Psaraftis's main interests are in transportation logistics, with a focus on sustainability issues in recent years. At MIT he headed some 11 research projects on various subjects including ship routing and scheduling, dial-a-ride systems and oil spill response. At NTUA he led some 30 projects in practically all areas of maritime transportation. Among the 20 or so EU projects he was involved in, he has coordinated 3 multi-partner EU consortia, including project Super Green on European Green Corridors (2010-2013). At DTU he leads a new project on mitigating and reversing the impact of environmental legislation on the Ro-Ro sector in Northern Europe, funded by the Danish Maritime Fund (2015-2017).

Psaraftis’s published work includes 3 books, 18 book chapters, over 135 articles in refereed journals and conferences, over 150 talks in various other conferences and over 100 other publications. He has chaired several international conferences and organized several conference sessions and clusters on topics such as logistics, vehicle routing and scheduling, maritime and intermodal transportation, ports, and maritime safety, security and environmental protection and is on the editorial board of several journals, including Transportation Science since 1987. He is a member of INFORMS since 1977 and a Fellow of SNAME since 2009. He has received various academic and industry awards.

In addition to his academic duties, Psaraftis served as CEO of the Piraeus Port Authority (OLP) from 8/1996 to 3/2002. His tenure has been linked with such developments that include (a) Piraeus putting itself on the list of the top 50 world container ports (No. 41 in 1998) and becoming the top hub of the Eastern Mediterranean, with traffic more than doubling from 575.000 TEU (1996) to 1.160.000 TEU (2001) and (b) OLP being transformed from a public law undertaking into a corporation (1999). He has been the 2nd longest serving CEO since OLP’s inception in 1930. In 2006 he became a member of the Greek delegation to the International Maritime Organization (IMO), where he has served as chairman of various correspondence and working groups and as a member of various expert groups.