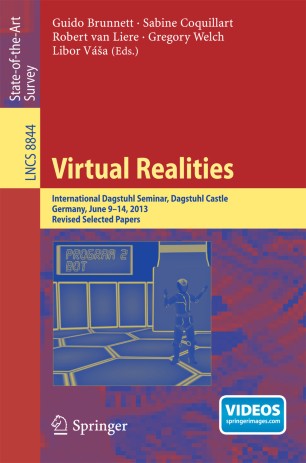 Virtual reality (VR) is a multidisciplinary area of research aimed at interactive human–computer-mediated simulations of artificial environments. An important aspect of VR-based systems is the stimulation of the human senses – usually sight, sound, and touch – in such a way that a user feels a sense of presence in the virtual environment. Sometimes it is important to combine real and virtual objects in the same real or virtual environment. This approach is often referred to as augmented reality (AR), when virtual objects are integrated into a real environment. Typical VR applications include simulation, training, scientific visualization, and entertainment, whereas typical AR applications include computer-aided manufacturing or maintenance and computer-aided surgery or medicine.

This book comprises a collection of research and position papers presented at Dagstuhl Seminar 13241 on Virtual Realities, held at Schloss Dagstuhl, Germany, in June 2013. The 13 papers in this volume were carefully reviewed and selected from 18 submissions. They are organized in topical sections on: VR environments; interactions and user experience; virtual humans; and tele-existence.