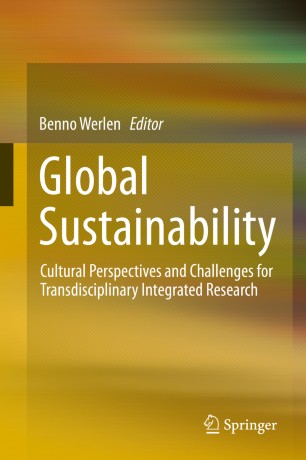 ​This book offers new perspectives of transdisciplinary research, in methodological as well as theoretical respects. It provides insights in the two-fold bio-physical and the socio-cultural global embeddedness of local living conditions on the basis of selected empirical studies from Latin America, Asia, Africa, Australia, and Europe. The theoretical foundations of ecological research and sustainability policies were developed at the end of the nineteenth century. They are largely based on investigations of living spaces, and the evolution and differentiation of varied life forms. This perspective is embedded in the practical and theoretical European problem situations of the past and lacks social and cultural differentiation. The transformation of spatial and natural relations as a result of the globalization process is so radical that new theories are needed to solve 21st century ecological problems. Moreover, in view of the lack of an ontologically sound and promising strategy for transdisciplinary problem solving, as well as an acceptable consideration of the power of cultural schemas relating to natural living’s interpretations, there is a strong need to focus on sustainable social practices, habits, and routines, rather than on predominantly living spaces or eco-topes. This book elaborates on the transdisciplinary approach by reflecting on the theoretical heritage and a global perspective of sustainability, by focusing on the primary role of a social approach in sustainability research, and by putting emphasis on cultural dimension of sustainability. It postulates that global sustainability is grounded in a global understanding of our everyday activities.

Prof. Dr. Benno Werlen holds the Chair of Social Geography in the Institute of Geography, Friedrich Schiller University of Jena, Germany. He studied geography, cultural anthropology, sociology and economics at the University of Fribourg (Switzerland) where he received his PhD in 1985 (published in English as ‘Society, Action and Space’, Routledge 1993) from the faculty of philosophy; the habilitation on “Sozialgeographie alltäglicher Regionalisierungen” (Social Geography of Everyday Regionalizations, 2 volumes) was accomplished at the faculty of natural sciences at the University of Zurich. He was a guest researcher at the University of Cambridge/UK, the University of California, Los Angeles (UCLA), and the London School of Economics; was a visiting professor at the universities of Salzburg, Geneva and Nijmegen and is a Panel Member of the ‘European Research Council/Brussels (Environment & Society)’. Since 2004 he holds the chair of the IGU Commission „Cultural Approach in Geography“ and is the initiator and executive director of the IGU initiative for the UN International Year of Global Understanding 2016. Since 2012 he is listed as a key thinker of space and place’ (Sage 2012). His research interests include the relationship between society and environment, the geographies of globalization and everyday regionalizations and the methodology of integrative research.