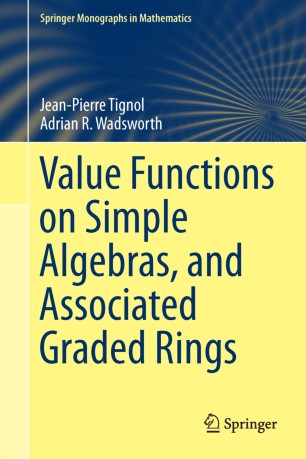 This monograph is the first book-length treatment of valuation theory on finite-dimensional division algebras, a subject of active and substantial research over the last forty years. Its development was spurred in the last decades of the twentieth century by important advances such as Amitsur's construction of noncrossed products and Platonov's solution of the Tannaka-Artin problem.

This study is particularly timely because it approaches the subject from the perspective of associated graded structures. This new approach has been developed by the authors in the last few years and has significantly clarified the theory. Various constructions of division algebras are obtained as applications of the theory, such as noncrossed products and indecomposable algebras. In addition, the use of valuation theory in reduced Whitehead group calculations (after Hazrat and Wadsworth) and in essential dimension computations (after Baek and Merkurjev) is showcased.

The intended audience consists of graduate students and research mathematicians.