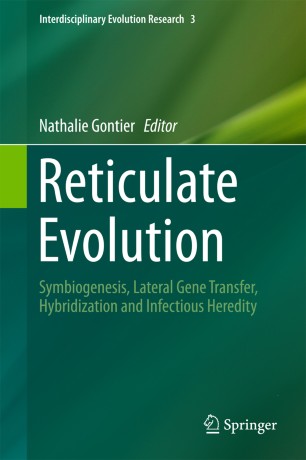 Written for non-experts, this volume introduces the mechanisms that underlie reticulate evolution. Chapters are either accompanied with glossaries that explain new terminology or timelines that position pioneering scholars and their major discoveries in their historical contexts. The contributing authors outline the history and original context of discovery of symbiosis, symbiogenesis, lateral gene transfer, hybridization or divergence with gene flow, and infectious heredity. By applying key insights from the areas of molecular (phylo)genetics, microbiology, virology, ecology, systematics, immunology, epidemiology and computational science, they demonstrate how reticulate evolution impacts successful survival, fitness and speciation.

Reticulate evolution brings forth a challenge to the standard Neo-Darwinian framework, which defines life as the outcome of bifurcation and ramification patterns brought forth by the vertical mechanism of natural selection. Reticulate evolution puts forward a pattern in the tree of life that is characterized by horizontal mergings and lineage crossings induced by symbiosis, symbiogenesis, lateral gene transfer, hybridization or divergence with gene flow, and infective heredity, making the “tree of life” look more like a “web of life.” On an epistemological level, the various means by which hereditary material can be transferred horizontally challenges our classic notions of units and levels of evolution, fitness, modes of transmission, linearity, communities, and biological individuality.

The case studies presented examine topics including the origin of the eukaryotic cell and its organelles through symbiogenesis; the origin of algae through primary and secondary symbiosis and dinoflagellates through tertiary symbiosis; the superorganism and holobiont as units of evolution; how endosymbiosis induces speciation in multicellular life forms; transferrable and non-transferrable plasmids and how they symbiotically interact with their host; the means by which pro- and eukaryotic organisms transfer genes laterally (bacterial transformation, transduction and conjugation as well as transposons and other mobile genetic elements); hybridization and divergence with gene flow in sexually-reproducing individuals; current (human) microbiome and viriome studies that impact our knowledge concerning the evolution of organismal health and acquired immunity; and how symbiosis and symbiogenesis can be modelled in computational evolution.

Nathalie Gontier is a philosopher of science and an anthropologist. Her main research interests lie in evolutionary epistemology and non-Darwinian evolutionary theories, how the latter differ from the Modern Synthesis and how they can be implemented into the linguistic sciences and the overall sociocultural domain. As the founding director of the Lisbon Applied Evolutionary Epistemology Lab, she is affiliated to the Centre for Philosophy of Science at the Faculty of Science of the University of Lisbon, and financed by the Portuguese Fund for Science and Technology. Previous appointments were held at the Dutch Free University of Brussels (Belgium), the Konrad Lorenz Institute (Austria), and the American Museum of Natural History (USA). Her research has been sponsored by the American John Templeton Foundation, the European Marie Curie Actions and the Belgian Fund for Scientific Research Flanders. She is the founder and editor-in-chief of the Springer book series Interdisciplinary Evolution Research.