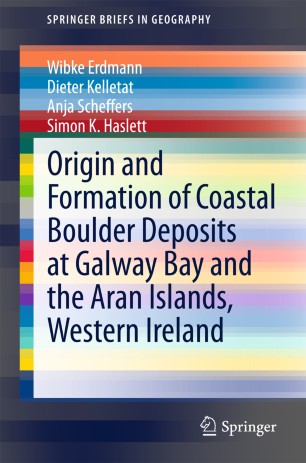 Origin and Formation of Coastal Boulder Deposits at Galway Bay and the Aran Islands, Western Ireland

This book presents geomorphological and sedimentological aspects of Holocene boulder ridges along the coastline of western Ireland (the Aran Islands and Galway Bay). Given these boulders’ size, extent and altitude, they are among the most spectacular deposits moved by marine forces worldwide and have challenged researchers to solve their enigmatic history. In particular, the question of how their features were formed (by storm waves or by tsunamis) is a matter of heated debate. The documentation is based on the authors' own field research, including observations on the boulder transport capacity of six extremely strong winter storms in the 2013/14 season. Discussing the arguments published to date and using more than 130 images for clarity, the book addresses the character, setting and extraordinary size of these boulders moved on land, comparing them with the situation along other exposed coastlines of the world.