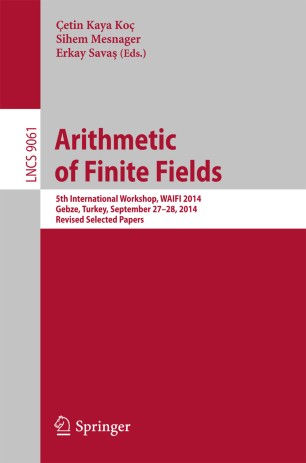 WAIFI: International Workshop on the Arithmetic of Finite Fields

This book constitutes the refereed proceedings of the 5th International Workshop on the Arithmetic of Finite Field, WAIFI 2014, held in Gebze, Turkey, in September 2014. The 9 revised full papers and 43 invited talks presented were carefully reviewed and selected from 27 submissions. This workshop is a forum of mathematicians, computer scientists, engineers and physicists performing research on finite field arithmetic, interested in communicating the advances in the theory, applications, and implementations of finite fields. The workshop will help to bridge the gap between the mathematical theory of finite fields and their hardware/software implementations and technical applications.