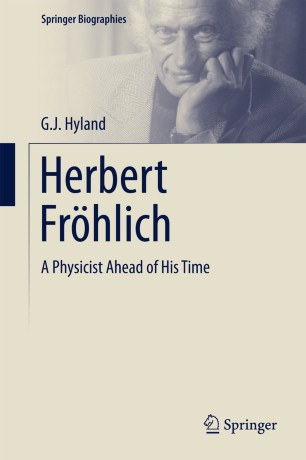 A Physicist Ahead of His Time

This biography provides a stimulating and coherent blend of scientific and personal narratives describing the many achievements of the theoretical physicist Herbert Fröhlich. For more than half a century, Fröhlich was an internationally renowned and much respected figure who exerted a decisive influence, often as a ‘man ahead of his time’, in fields as diverse as meson theory and biology. Although best known for his contributions to the theory of dielectrics and superconductivity, he worked in many other fields, his most important legacy being the pioneering introduction quantum field-theoretical methods into condensed matter physics in 1952, which revolutionised the subsequent development of the subject. Gerard Hyland has written an absorbing and informative account, in which Herbert Fröhlich’s magnetic personality shines through.

Gerard Hyland was born in Birkenhead, Merseyside, UK in 1942, entered the University of Liverpool in 1961 and was Fröhlich’s last doctoral student, 1965-68. He taught theoretical physics at the University of Warwick 1968-2001, was consultant to the EU on the thermophysics of nuclear fuels and high temperature superconductors, 1980-2001 and in 1997 was elected a member of the International Institute of Biophysics in Neuss-Holzheim, Germany. He maintained close contact with Fröhlich, collaborating with him on a number of research topics and contributing to his two Festschrifts.

“It is a valuable technical exposition of Fröhlich’s oeuvre—not only his contributions to physics, but also his contributions to theoretical biology and his reflections on the relationship between mathematics and physics and between microscopic and macroscopic descriptions. Hyland must have invested a huge amount of work on his book; it is a labor of love.” (Silvan Schweber, Physics Today, Vol. 69 (5), May, 2016)

“The book is meticulously referenced and filled with photos and historical letters. Hyland has presented an inspiring account of a trailblazing physicist and outdoorsman who counted Schrödinger, Sommerfeld, and Feynman among his inner circle … .” (Ram Devanathan, MRS Bulletin, Vol. 41, February, 2016)