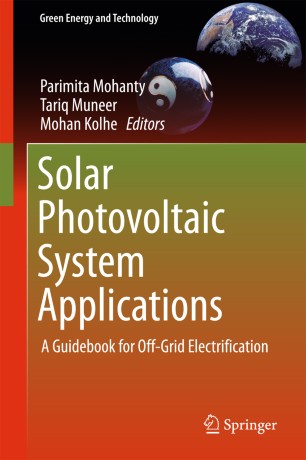 A Guidebook for Off-Grid Electrification

Presenting a complete guide for the planning, design and implementation of solar PV systems for off-grid applications, this book features analysis based on the authors’ own laboratory testing as well as their in the field experiences. Incorporating the latest developments in smart-digital and control technologies into the design criteria of the PV system, this book will also focus on how to integrate newer smart design approaches and techniques for improving the efficiency, reliability and flexibility of the entire system. The design and implementation of India’s first-of its-kind Smart Mini-Grid system (SMG) at TERI premises, which involves the integration of multiple renewable energy resources (including solar PV) through smart controllers for managing the load intelligently and effectively is presented as a key case study. Maximizing reader insights into the performance of different components of solar PV systems under different operating conditions, the book will be of interest to graduate students, researchers, PV designers, planners, and practitioners working in the area of solar PV design, implementation and assessment.

Dr Mohanty has over 14 years of experience in the field of solar photovoltaic system design and module testing involving batteries, solar based product design and customization, as well as participating in field performance assessments of solar PV systems, project planning, development and formulation of PV /off-grid electrification projects.
She has been actively involved in designing, simulating and developing distributed generation based smart grid/mini-grid /micro-grid system and played a pivotal role in demonstrating a first-of-its kind smart mini-grid in India.

She has handled more than 15 projects as technical lead and has co-authored a book titled Renewable Energy Engineering and Technology: A Knowledge Compendium where she has written a chapter on solar photovoltaic. She has contributed more than 15 papers, which were published in reputed national and international journals as well as around 15 invited and featured articles and more than 5 patents applied for in her credit. She represents various national level technical committees as solar PV experts and is a life member of various professional and academic organizations.

Professor Tariq Muneer, Professor of Energy Engineering at Napier University, Edinburgh currently chairs an active group engaged in research on ‘Sustainable Energy’. Professor Muneer is an international authority on the subject of solar energy and its use in buildings with over 35 years experience. He is the author of over 215 technical articles, most of which have been distilled in his research monographs. Professor Muneer is also a visiting professor for the period of 2013-2020 for the following the University of Granada, Granada, Spain and the University of Maribor, Celje campus, Slovenia.

Professor Muneer is the co-ordinator of Chartered Institution of Building Services Engineers’ Solar Data Task Group and in this capacity he has been involved in the production of the CIBSE Guides A& J for Weather and Solar Data. Professor Muneer has also been employed both by the government and industry as a consultant on a large number of engineering projects. Professor Muneer has been awarded several prestigious awards including the Royal Academy of Engineering Industrial Fellowship (2000-02), the Royal Academy of Engineering Engineers Secondment Overseas (1995), the Leverhulme Trust (1989) and the University College, Oxford/General Electric Company (1989) Research Fellowships. He is also the recipient of the Osmania University’s Karamat Jung Gold Medal (1974), CIBSE Carter Bronze Medal (1990), CIBSE Napier Shaw Bronze Medal (1999), Millennium Commission’s Fellowship Award (1999), Walsh-Weston (Society of Light & Lighting, London) Award (2002), Services to Industry Group’s Proof of Concept award (2003) and the Scottish Green Energy, Highly Recommended Best Renewable Award (2006).

Under Professor Muneer’s supervision 3 MPhil and 28 PhD candidates have successfully gained their awards. A further five doctoral programmes are currently underway.Professor Muneer has been a PI for one EPSRC grant that dealt with solar radiation and daylight modelling and a co-investigator for two further EPSRC grants that dealt with the subject areas of ‘climate change’ and ‘decentralised grids’. He has several research monographs and books in his credit
Professor (Dr) Mohan Kolhe is with the University of Agder (Norway) as full professor in electrical power for smart grid and renewable energy in the Faculty of Engineering and Science. He has also received the offer of full professorship in smart grid from the Norwegian University of Science and Technology (NTNU). He has more than two decades academic experience at international level on electrical and renewable energy systems. He is a leading renewable energy technologist and has previously held academic positions at the world's prestigious universities e.g. University College London (UK / Australia), University of Dundee (UK); University of Jyvaskyla (Finland); Hydrogen Research Institute, QC (Canada) etc. He was also a member of the Government of South Australia’s Renewable Energy Board (2009-2011).

He has been successful in winning research funding from prestigious research councils (e.g. EPSRC, BBSRC, EU, NRP, etc.) for his work on sustainable energy systems. He has published extensively in the area of energy systems engineering. He has been invited by many international organizations for delivering expert lectures / courses / key note addresses. He has also been member of many academic promotional committees.