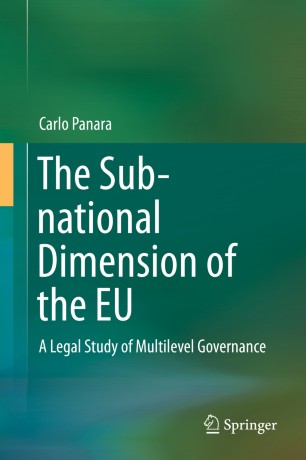 The Sub-national Dimension of the EU

A Legal Study of Multilevel Governance

This book is the first monograph-form legal study on multilevel governance in the EU and represents a radical change in the approach to this topic. Particularly after the Treaty of Lisbon’s entry into force, research on multilevel governance can no longer remain confined to the analysis of political dynamics or of soft law arrangements. Multilevel governance emerges as a constitutional principle in the European constitutional space, envisaging a method of governance based on the strong involvement of sub-national authorities in the creation and implementation of EU law and policy. Its foundation is in the mosaic resulting from the constitutional systems of the Union and its Member States. Multilevel governance arrangements play a fundamental part in achieving key Treaty objectives (such as subsidiarity, respect for the national identities of the Member States including regional and local self-government, openness, and closeness to the citizen). These arrangements lend legitimacy to EU decision-making, while also promoting constitutionalism and democracy in the EU.