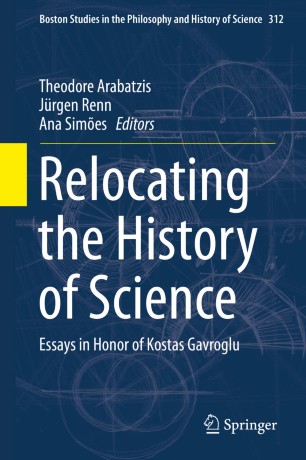 Relocating the History of Science

Essays in Honor of Kostas Gavroglu

Part of the Boston Studies in the Philosophy and History of Science book series (BSPS, volume 312)

This volume is put together in honor of a distinguished historian of science, Kostas Gavroglu, whose work has won international acclaim, and has been pivotal in establishing the discipline of history of science in Greece, its consolidation in other countries of the European Periphery, and the constructive dialogue of these emerging communities with an extended community of international scholars.

The papers in the volume reflect Gavroglu’s broad range of intellectual interests and touch upon significant themes in recent history and philosophy of science. They include topics in the history of modern physical sciences, science and technology in the European periphery, integrated history and philosophy of science, historiographical considerations, and intersections with the history of mathematics, technology and contemporary issues. They are authored by eminent scholars whose academic and personal trajectories crossed with Gavroglu’s.

The book will interest historians and philosophers of science and technology alike, as well as science studies scholars, and generally readers interested in the role of the sciences in the past in various geographical contexts.